This Sci-Fi project was designed in Maya and rendered in unreal engine 4. All these textures were created in Quixel NDO,DDO and Photoshop. It takes nine weeks from draft to this final position.
Project duration: 9 weeks
Program use: Quixel NDO, DDO, PhotoShop, Unreal Engine 4.

​    This Sci-Fi project is the best of my art work in 2015. After many failure and rework experience, finally, one of them can stand up and show its beauty to all of my friends or family who support me in this journey. The following slideshow contain some textures, high resolution screen shorts and model images.
​The following video can directly show all details from inside of this project in real time. I also create some smoke effect and Assets animation in the engine room to make it live. Thanks for watch, please leave any suggestion or commons in the YouTube channel.

Night-Shhhh is a 3D survive game which made in Unreal Engine 4 2014.
I am the environment designer, assets designer and mainly response for basement design.
Basement is a check point for player to rest their nervous journey.
High poly to low poly projections for normal/cavity/AO maps created using xNormal and Maya.
All concepts design done by me.
All models created by me.
Project duration: 4 weeks
Program use: PhotoShop. 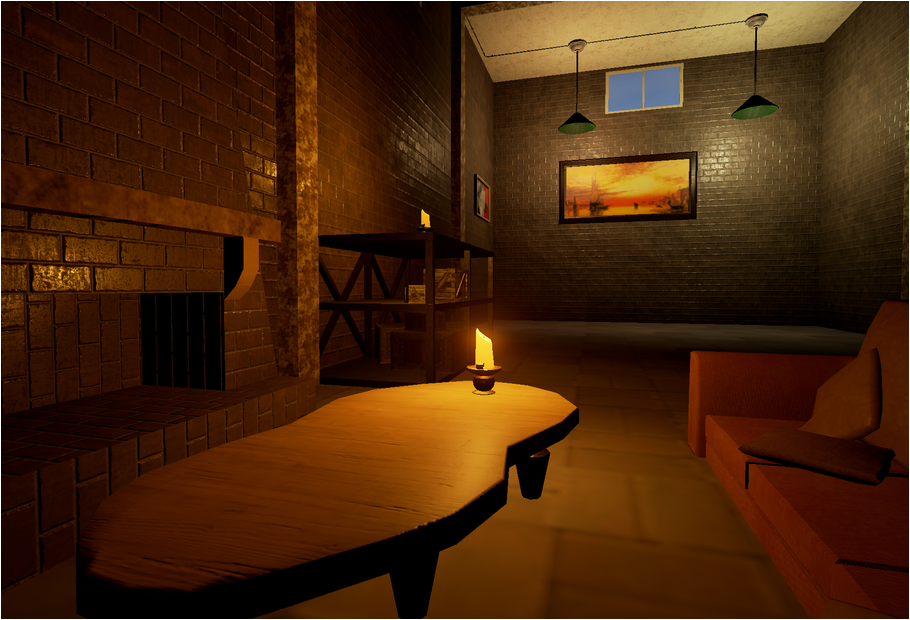 ​Background Story:
​    Anna awakes in the library with no memory how she got there.  In a trembling voice, she whimpers into the darkness "Is anyone out there?". Silence. As, she scrambles to leave, one thing becomes clear: she's locked in. She frantically tries to force open a window, but a wind rises from nowhere to bolt her escape shut. As her desperation builds, a cackling fills the space "I am FREE at last. Run mortal, run!"
Game-play:
​    The player (Anna) is faced with a choice: reseal the dark ghost or escape from the library.  To reseal the ghost, the player will need to explore the library for clues to the ghost's origin; these clues then lead the player to items that can seal the ghost away for good. To escape, the player must find the library key. In both scenarios, the player will need to traverse the library with her cellphone as the only light source (though there are opportunities to recharge her battery or even use moonlight via a mirror). In addition, any footsteps or noise the player makes will attract the dark ghost's attention, drawing the player closer to her doom. However, a clever player may turn this into a tactic for misdirecting the ghost. Good luck players, may the moon guide your path even when your cellphone fails.
return to home
Powered by