This is a 3D character design project that from the sketch to the final high poly rendering post image. It also my thired trying on such big characer design. 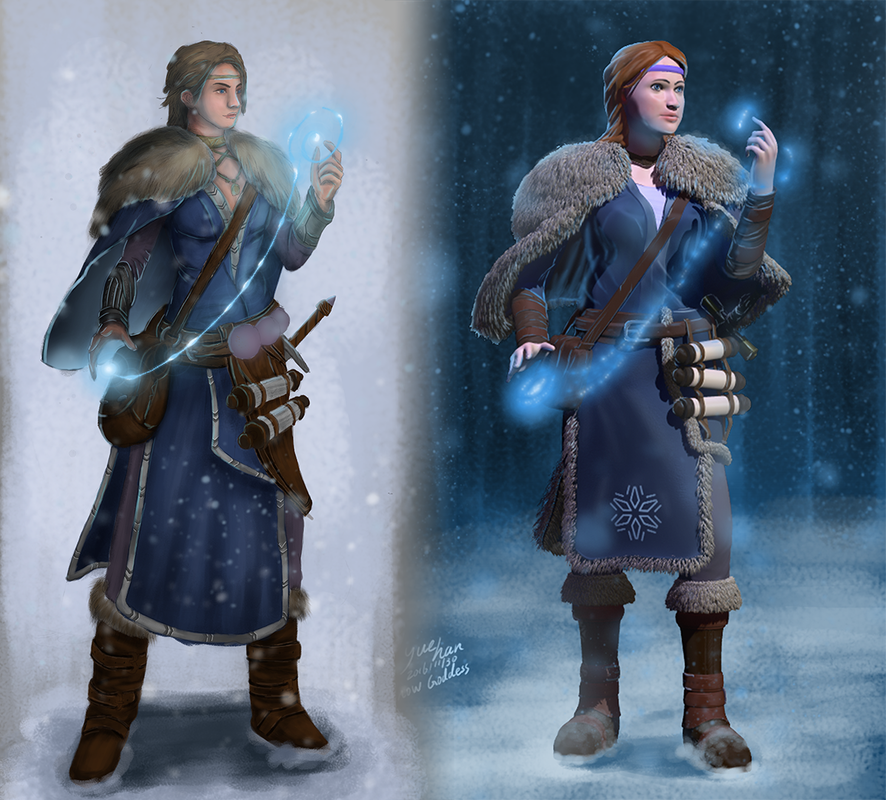 The village of White forest is the closest place to the holy mountain where the snow goddess lives.
Every birth in the village will receive the blessing from goddess which protects them from the sickness and cold climate.
Rena is a gifted girl. Because she has a clean heart and pure soul, the blessing is not only let her immune the illness and also it opens a window to connect with Goddess herself. Therefore under the best mentor’s teaching, she mastered her studies of snow magic less than two years. And soon, she becomes the youngest snow priest in the village. She promises to use the power to help and protect the balance between nature and her people.

Few years after, the magic industry revolution rises in the center of human society. The revolution creates the massive impact that even this isolated village cannot stand along from the storm. The first group guests are the trade caravan. They bring a lot new products to exchange the nature resource. And more importantly, they show the young villagers a better future.
Traditional culture and advance lifestyle cause the conflict that separates village into two parts. Later on, a large number of young teens left the village and seek a new life.

The year after, several people return village with a group businessmen from Empire Company. The empire company offers a term that they wish to exploit this place peacefully include keeping the religion, and meanwhile, they will help to build this village to next level. Both sides have the agreement.

At the beginning, they make the promise come true, the village becomes a modern town that attracts all different kinds people to find their fortune at here. But shortly, the peace and balance between nature and human are broken. All snow priests realized the situation is already out of control and meanwhile they are losing power every day. Because of human greed and violence, these negative desires does not only bring the conflict but effect on snow goddess as well.

​    When the diplomacy is not working, the war is coming. Even the priests hold the blessing from the goddess, the advance magic technology destroy their defense in days. Rena survived from battle, but the chaos of war block the connection from the goddess. She realized the only hope is travel to the ice place and meet goddess to stop the war.
​

​    Rena is a 20 years old girl. By walkthrough the story, players shall see her growth from each combat. Every decision she made, every victory she wins shall be the fact to push her more maturely. Players can find the same experience from her figure to match their own life. She can be the one that doing something players did not have chance to do in their real world. However, this does not mean she has no personality. She will cry when lose her followers by her mistake. She will laugh when gets the victory from a tough fight. No matter what happens, she will never feel lost but always forward to the truth and no surrender to weakness.  And this is most young teens shortly needs. We may wonder if it is right things to do, we may regret what we have done in the pass. But we should not waste time waiting at same point without trying the new way.

The core game mechanics are about choice. Every single decision players made in the game will be effect remaining story line and also the power of her spell. The other parts of core mechanic are spell system and heart system.  During the game, player can chose be a ruthless murderer. Those life ends by players hand or decision will corrupt Rena’s heart. If this happen, she will keeping lose the connection strength with snow goddess but get new alliance from dark depths of despair. This will also effect on her spell system. Rena could not be allowed to use powerful snow magic. Instead, she will receive talent from dark magic represent greedy and fire magic represent wrath. On the other side, if she shows love and brings hope to her people.  She will keep the connection with goddess and learn the new magic from her. If this happen, she will be allowed to cost even more powerful spell with light magic and snow magic. If players wish to stay in neutral ground, she will cut off both side and open a new spell tree called chaos. Different spell system can be used by unique strategy. For example, the chaos spells allow players control enemy in battle. Also it allow player to change other people’s behave to create a new ally.
​ 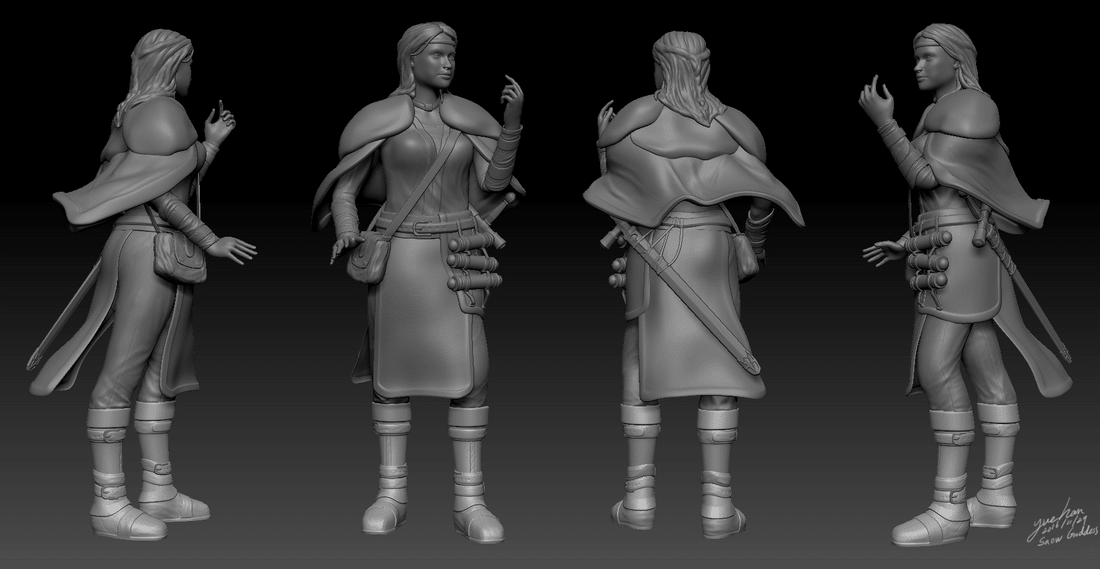 Rendering in Zbrush and Photoshop:
​ 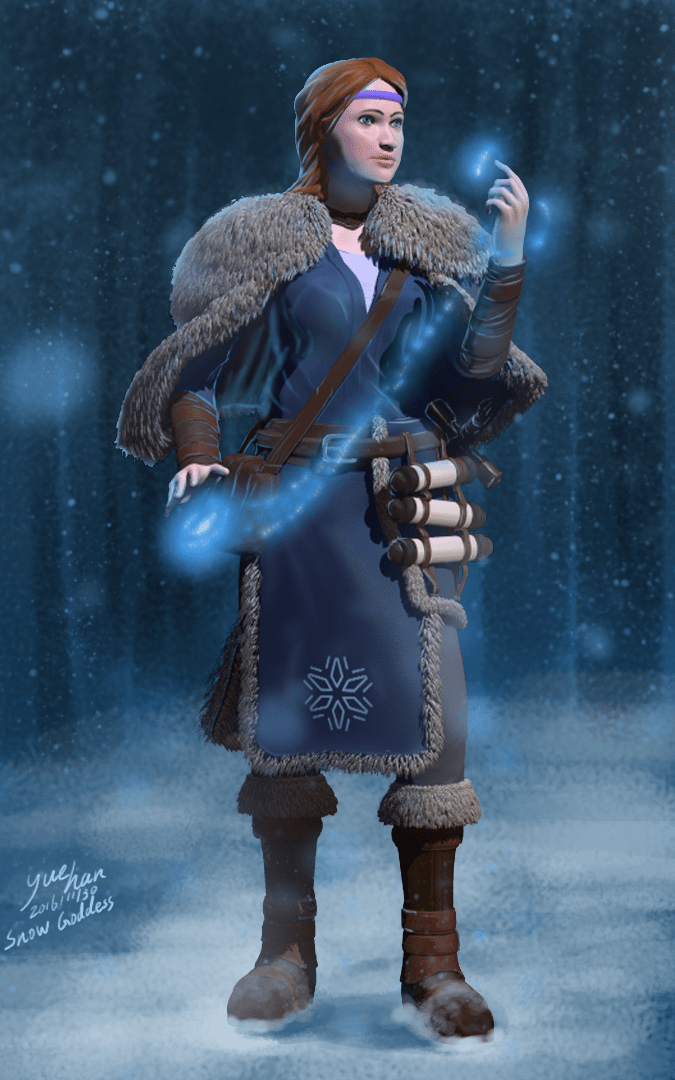 return to home
Powered by